The program allows homeowners, small businesses and not-for-profits to finance energy efficiency improvements through a charge on their utility bill. The program takes January 1, 2018.

Explained by State Assemblyman Sean Ryan, one of the bill’s sponsors. 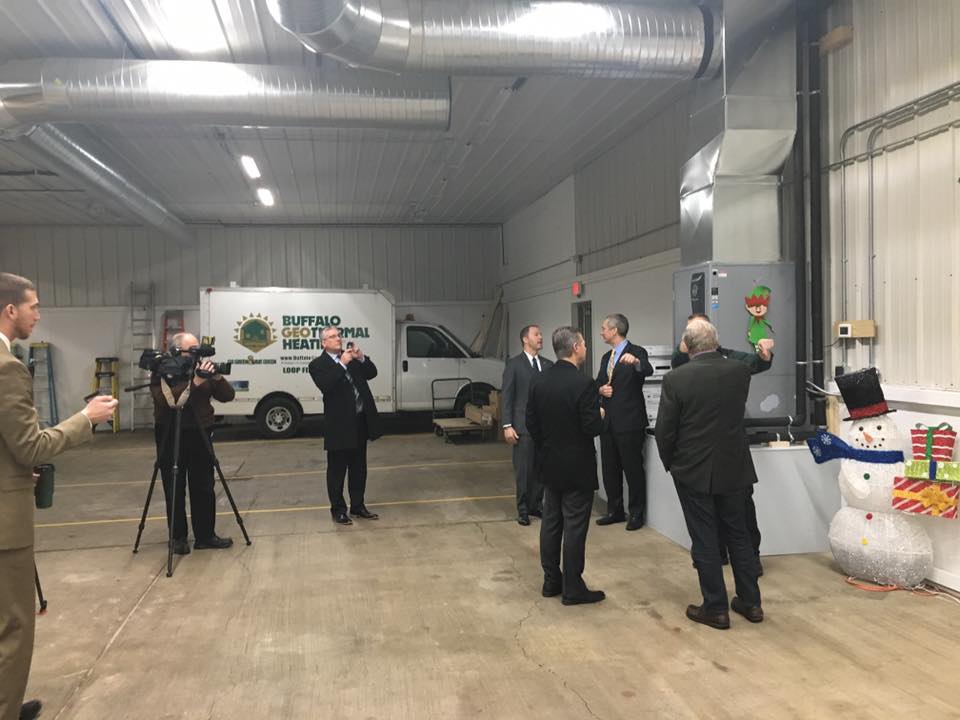 Buffalo Geothermal is proud to partner with Natale Builders, one of Western New York’s premier builders, to construct 35 new homes to a new energy efficiency standard unparalleled in the Buffalo/Niagara region.
Rivera Greens is the first certified NAHB (National Association of Home Builders) Green Standards/Eco-Friendly Development in Western New York and consists of the first “Net Zero” homes and development dedicated to conserving Energyâ€¨and Green Standards. All home designs in Rivera Greens are Energy Star rated and will save the owners 60%-100% of their utility bills.

Natale Builders is committed to offer those ultra energy efficient homes at no extra costs to its customers, demonstrating a new standard in home building and a leading the way by applying cutting edge energy efficient technology.

Besides dramatically reducing the energy needs of the homes, state of the art geothermal technology will be installed to comfortably heat, cool and dehumidify the energy efficient homes, in addition to heat the domestic hot water.

Natale Builders applies this visionary approach not only with the Rivera Green Development, but has committed itself to offer advanced geothermal heating and cooling systems to all their customers, effectively setting a new standard in energy efficiency.

The Erie Community College (ECC) Green Building Technology Center was designed to showcase cutting-edge energy efficient building technologies in an educational setting. ECC engaged Buffalo Geothermal to design and install a state of the art geothermal heating and cooling system in this rather small 1342 square foot formerly residential house. On display and available for student training are a variety of geothermal and distribution systems.

A dual compressor stage water-to-air heat pump (WaterFurnace 5 Series) provides both heating and cooling. The dual stage technology ensures that the heatpump runs in the more efficient 1st stage most of the time when not the maximum amount of heat is needed. This allows the variable speed fan to adapt and operate at the quietest and most comfortable setting, with the capacity to automatically increase the fanspeed if more capacity is needed. A bottom-discharge configuration was selected to allow for easier viewing by students of the inner workings of this heat pump.

A water-to-water heat pump handles the radiant zones as well as conditioning the domestic hot water for the facility all year around. The most efficient radiant distribution systems were installed, comprising of extruded aluminum panels on top of the subfloor just beneath the finished hardwood flooring, as well as radiant pipes below the floor utilizing aluminum heat transfer plates in order to further reduce the needed water temperature.

Multiple innovative control strategies have been applied in order to maximize efficiency. The system measures the outside temperature and generates only the water temperature needed to heat the building. A single ultra efficient DC inverter driven variable speed pump ensures that only the minimum amount of pumping power is used to keep each radiant zone at a desired temperature. Each radiant zone is controlled by a motorized zone valve and has its own thermostatic settings.

Buffalo Geothermal installed a horizontal slinky loop-field, with 3,000 ft of high density polyethylene pipe set at 8â€™ depth underneath the surrounding parking lot to allow for effective heat transfer. The loopfield serves both heatpumps at the same time, thus if only one heatpump is running, the flow and pumping power is reduced to save electricity, and the heatpump running benefits from the larger loopfield capacity.

Buffalo Geothermal and Earth Sensitive solutions primarily designed the system as an educational and training tool for the next generation of renewable energy installers studying at ECC, utilizing the newest advancements in geothermal technology and design to push geothermal efficiency and comfort to the next level.

See the Buffalo News article about the EEC green technology center at http://www.buffalonews.com/city-region/erie-community-college/ecc-opens-green-center-to-train-students-in-solar-wind-and-geothermal-technologies-20130912

Buffalo Geothermal is proud to partner with Rehwaldt builders for the all new Deer View patio home development in Royalton, NY. All homes will be Energy Star rated and built to be highest standard in efficiency and sustainability, having a high efficiency geothermal system for heating, cooling and hot water generation, running completely without any fossil fuel.
This allows country side living in a beautiful setting without the dependency for propane or heating oil, the lowest possible operational cost and the highest comfort available today.”

Learn more about the Deerview development

The official peer reviewed Journal of the American Society of Heating, Refrigerating and Air-Conditioning Engineers (ASHRAE)

When the Lockport Housing Authority converted their Office Building in 2014 from gas to geothermal, it set two goals for us as a contractor:

The conversion gave us a unique opportunity to compare the energy impact of the geothermal system The monthly energy data was provided by the Housing Authority, and ASHRAE scrutinized everything through 3 peer reviewers in the process.

The data was normalized for the roof insulation upgrade and the weather, excluding all the cociding factors. The geo system reduced normalized natural gas consumption from 160,537 kWh (537 Million BTUs) in 2013 to 1,436 kWh in 2015. Normalized electricity consumption increased in 2015 by 13,666 kWh, so the geo system provided the space conditioning with 8.5% of the energy of the previous system. This was not only due to the higher efficiency of the geo system in heating, but also due to the significantly reduced electrical consumption during air conditioning season. In addition, the older furnaces and boilers were not operating at their nameplate efficiency between 70-85%, but between 50-60%, and also consumed significant energy for blower and pumping power not accounted for in the AFUE ratings. Thus the entire site’s energy was reduced by 60% through the installation of the geo system. In addition, the entire site is now free of emissions with the exception of the weekly test run of the emergency generators.

This is an important peer reviewed case study of the energy impact of a geothermal conversion from fossil fuel based heating (and conventional A/C) to geothermal, and indirectly the impact on carbon emissions.

Jay Scott, the Editor in Chief of the ASHRAE journal, wrote an editorial on the article, and highlighted the significance of the fact that the data was collected during the polar vortex winter of 2015, with February of 2015 being the coldest month on record, and where the geo system did not use any supplemental electric heat.

In the editorial Mr Scott pointed out that:

This article went out to the 50,000 ASHRAE engineering members worldwide. We are glad it highlights NYS leadership role in designing and building ultra efficient geothermal systems, to reduce carbon emissions, and we are glad we could exemplify in a case study how this could be achieved.

The National Association of Home Builders (NAHB) presented its prestigious “Project of the Year Award for Green Site Development – Single-family Detached” to Natale Builders on February 5, 2014 for the company’s construction of the ultra-efficient, environmentally-friendly Rivera Greens subdivision. Located in Clarence, New York, the 35 sustainable green homes in the community were all built to meet certification requirements for the National Green Building Standard (NGBS).

“It’s an honor to receive this NAHBGreen Award for the first green development created in New York State,” says Larry LaDuca, general manager of Natale Builders in Clarence, N.Y. “We constructed each home in the Rivera Greens development from the ground up with green building practices and products.”

“We’re very proud that 95 percent of the homes in this development use an alternative energy source such as geothermal or solar,” LaDuca said. “Every home at Rivera Greens consists of near-energy-neutral homes and exceed ENERGY STAR 3.0 qualifications.”

According to NAHB, The Green Project Awards category highlights those projects showcasing outstanding application of green technologies to a variety of project types. All projects are scored to the ICC 700 National Green Building Standard to establish the relative sustainability of each, and then judged on other merits such as green innovation and design.